The Granada Hills area of Los Angeles has been struck by an earthquake just before midnight local time, the Souther California Earthquake Centre (SCEC) said. No damage or injuries were reported.The epicenter of the 3.6 magnitude earthquake was located at the 34.303°N 118.486°W mark of Granada Hills, according to the United States Geological Survey (USGS).It was recorded to have occurred at a depth 4.3 miles at an intensity level of IV (light), with light shaking and no damage reported, according to the USGS.The SCEC official Twitter account said that light shaking was first felt in San Fernando Valley around 11:41 p.m. local time.The epicenter of the latest earthquake was within the Los Angeles City limits, the Los Angeles Fire Department (LAFD) reports. Light shaking was reported in surrounding areas including around the Thousand Oaks and Simi Valley region as well as some parts of Anaheim, the Angeles National Forest and Santa Ana, the USGS said.The LAFD was officially in « Earthquake Emergency Mode » following the shake, surveying the city to assess the need for emergency services. The inspection has been completed and the LAFD has reported « no loss of life or serious injury » and  » no major infrastructure damage » as a result of the latest earthquake. »The LAFD has concluded the systematic survey of the City of Los Angeles by ground and air, and is pleased to report that no major infrastructure damage was noted by our personnel in the City of Los Angeles, and that there has been no loss of life or serious injury that we can directly attribute to the M3.6 earthquake, » the LAFD stated on its website. »With our survey complete, the LAFD has concluded Earthquake Emergency Mode and has resumed normal operations. We ask you to use today’s quake as a reminder to be prepared, » it added. 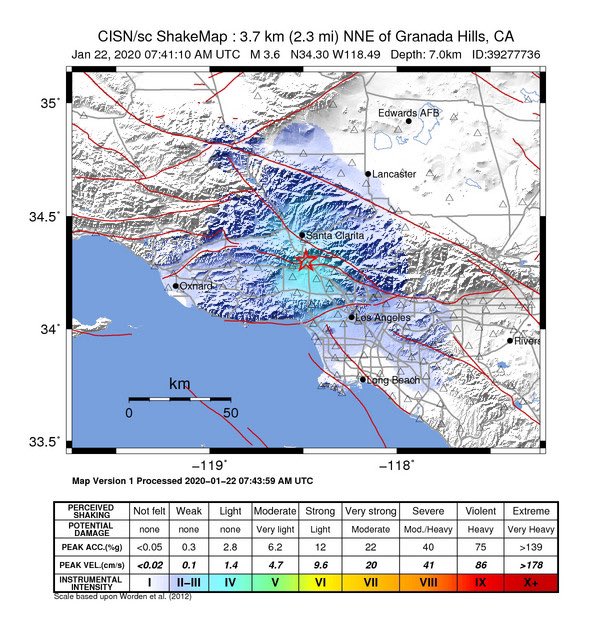 46 people are talking about this

The Los Angeles Police Department has also confirmed « there are reports of any no damage and/or injuries to the LAPD at this time » and added « The LA 9-1-1 system is fully functional. These jolts are a good reminder to #beprepared, » in a post on its official Twitter account. »Take the time now to practice what to do when earthquake shaking starts: Drop, Cover, and Hold On. If you are in bed, stay in bed and put a pillow over your head. To learn what to do in other locations, such as in a car or in a theater, visit the Earthquake Country Alliance Website, » the Los Angeles Emergency Management Department advises on its blog.

113 people are talking about this

Several Los Angeles residents have taken to social media to report the incident and startled by the late night shake, using the hashtags #earthquake and #laearthquake, which have been trending on Twitter, along with several other related terms including « Granada Hills ».Shakes were also felt in the Glendale and Santa Clarita, according to reports from local residents on social media. »Got a little shaky in Santa Clarita just now #earthquake #tremor, » wrote @copypastechris. »#Earthquake just occurred, I am in Glendale, did the greater Los Angeles area feel it as well? #LAEarthquake, » wrote @SavantSociety. »That was a pretty significant shake there…. look at my lights!! #earthquake, » wrote @BillyTheG33.

That was a pretty significant shake there…. look at my lights!! #earthquake 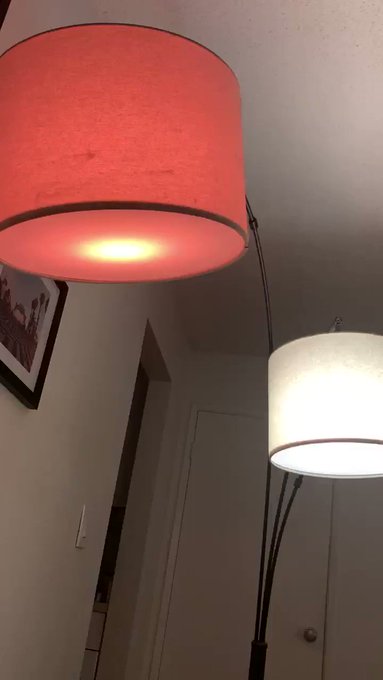 174 people are talking about this

« Born and raised in California and I swear to god I will never lose the sense of panic when an earthquake hits. This is the type of trauma you can never get over. #earthquake, » wrote @itslydiaaaa.Last year, an earthquake warning app that alerts Los Angeles residents of an earthquake that’s about to happen where they’re sitting, standing or laying was launched by the city of Los Angeles.The ShakeAlertLA app was designed to alert residents in a time frame of 5 to 10 seconds when shaking should happen in their vicinity, according to the LA mayor’s office.